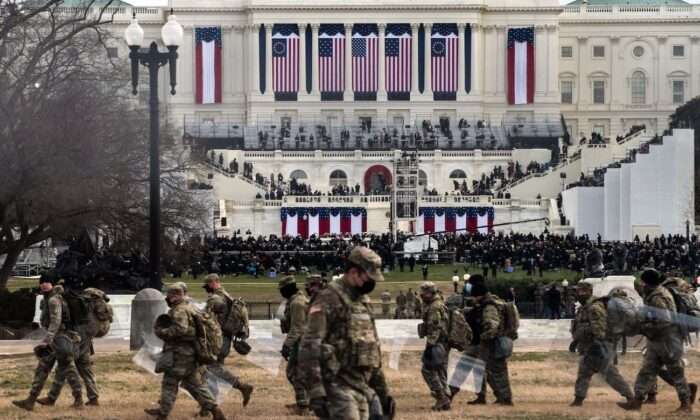 Former President Donald Trump offered to deploy 10,000 National Guard troops in Washington D.C. prior to Jan. 6, the day of the Capitol building breach, according to former White House chief of staff Mark Meadows.

Meadows told Fox News’ “Sunday Morning Futures” that although Trump had been vocal about offering Capitol Police and National Guard presence at the Capitol on multiple occasions last month, his offer was rebuked “every time.”

“We also know that in January, but also throughout the summer, that the president was very vocal in making sure that we had plenty of National Guard, plenty of additional support because he supports our rule of law and supports our law enforcement and offered additional help,” Meadows told host Maria Bartiromo.

“Even in January, that was a given, as many as 10,000 National Guard troops were told to be on the ready by the Secretary of Defense” Meadows said. “That was a direct order from President Trump and yet here is what we see … all kinds of blame going around but yet not a whole lot of accountability.”

“That accountability needs to rest where it ultimately should be and that’s on Capitol Hill” Meadows added.

The Pentagon and the office of Washington D.C. mayor Muriel Bowser didn’t immediately respond to requests for comment by The Epoch Times.

House Democrats, joined by 10 Republicans, voted on Jan. 13 to approve a single article of impeachment against Trump for “incitement of insurrection,” making him the first president to be impeached twice. When the Senate trial opens on Feb. 9, he will become the first former president to stand trial.

Meadows described the impeachment effort against the former president as “political theater.”

“It’s really about Democrats trying to once again make a political point,” he said. “This whole impeachment is designed to remove someone from office. President Trump is a private citizen at this point. And yet they can’t stand it. They have to continue to go ahead and try to put forth some kind of narrative that scores political points.”

He added, “But we have seen it before. The American people are not going to have it. We have already had 45 senators say that this is unconstitutional. But it’s more than that. It’s a violation of due process. It’s not what our founding fathers set up. And it sets a very bad precedent of future officeholders.”

Attorneys for Trump on Monday set out their defense for his Senate impeachment trial, arguing that the Senate has no jurisdiction to try a former official, that the House’s charge against the 45th president is deficient, that their client was deprived of due process and had his right to free speech violated by the article of impeachment.

In the 78-page trial memorandum, the attorneys posit that the Senate taking up the impeachment amounts to a bill of attainder, an act that the Constitution prohibits the legislature from taking because it would amount to inflicting punishment without a jury trial. The defense also contends that the “incitement” accusation is contradicted by the plain text of the transcript of the president’s Jan. 6 speech.

“The Article of Impeachment presented by the House is unconstitutional for a variety of reasons, any of which alone would be grounds for immediate dismissal. Taken together, they demonstrate conclusively that indulging House Democrats’ hunger for this political theater is a danger to our Republic democracy and the rights that we hold dear,” the trial memo, authored by Bruce Castor, David Schoen, and Michael van der Veen, states.

Ivan Pentchoukov contributed to this report.

Help us spread the truth. Share this article with your friends.