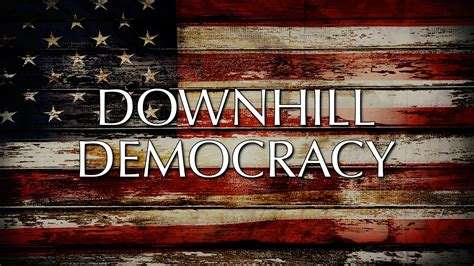 What if you believed that the U.S. was in mortal danger because its elections continually led to the wrong results and policy choices?

What if the “people” were just too ignorant of what was good for them and continually displayed such dangerous cluelessness in how they voted? How could you even work with such chumps, dregs, crazies, clingers, deplorables, and irredeemables?

What if you still gave them lots of chances to reform and become enlightened on climate change, transgenderism, and race relations? And yet still they never appreciated your efforts on their behalf. Instead, they continued to buy AR-15s, or watch NASCAR or buy a RAM 2500 with a 700hp engine.

What if you worked hard to instruct these idiots through the media, social media, the arts, entertainment, foundations, academia, public schools, professional sports, Hollywood, Wall Street, and even the corporate board room—and yet still despite your control of the nation’s messaging and influencing, the dumb electorate voted for ignoramuses and unqualified buffoons?

What then would you be willing to do to save the country?

In a word, you would say “democracy dies in darkness” (darkness as in ignorance). And then you would scream “FORWARD!” And rally, with “YES, WE CAN!”

So, what you would do?

STEP ONE. Go after the wrong-minded Supreme Court. Discredit it. Have senators declare it “illegitimate.” Talk openly of ways the Pentagon or National Parks could avoid or weaken the Court’s rulings by creating sanctuary areas immune from federal jurisdiction.

Have the senate majority leader lead a mob to the court’s very doors and openly threaten conservative justices by name. Threaten their persons by warning that because they sowed the “wind” they would soon reap the “whirlwind” and thus had no idea what would “hit” them. Have mobs surround their houses and violate—with impunity—all federal laws prohibiting such intimidation of justices. In fact, ignore the law entirely and let anyone scream 24/7 outside the incorrect justice’s home.

Ferret justices out at restaurants. Swarm their dinner stables. Get in their faces. Have the president go abroad and openly attack the court in front of his foreign hosts. Serially scream in Congress that the court must be packed, enlarged by six more justices immediately, good men and women who would be properly sober and judicious progressives picked by legal-eagle President Joe Biden.

Talk of impeaching an illiberal justice. Talk even of subpoenaing his wife before a congressional committee. Protest, demonstrate, and obstruct any justice at campus lectures or public forums. Make clear the price for his harmful bad thought.

STEP TWO. Turn the FBI into a proper state police, an enlightened American Stasi. Sic the FBI on political opponents: confiscate the phones of elected House members in public. Raid the homes of journalists in the predawn hours. March them out in their underwear. Stage SWAT raids against an opposition president’s ally. Hell, raid the ex-president’s house itself. And tip off CNN to film the entire spectacle. Leak to the Washington Post that “nuclear secrets” for two years have been in Trump’s possession! Surprise the president’s lawyer at his office. Seize his files. Arrest a sexagenarian presidential advisor for not showing up for Congressional testimony—and put him publicly in leg irons.

Divert the FBI from silly things like investigating terrorists and cartels and traffickers swarming across the southern border or investigating bribery of officials by foreign governments. Instead, put FBI undercover agents at school board meetings, secretly to learn about and intimidate counter-revolutionary loudmouth parents who endanger the work of idealistic teacher unions and woke school board members.

The Secret Service is too ossified to protect progressive presidents from right-wing interference. The new FBI would become a presidential retrieval service. If dark elements may possess the first daughter’s lurid lost diary, replete with confessions of showering underage with the Commander-in-Chief, then hunt it down, and raid journalists’ homes. If a crack-addicted son of the president lost his laptop incriminating the president, then find it. Sit on it. Stonewall it and keep it out of the pre-ballot-day news.

Appoint FBI directors who are true-blue believers and are willing to stonewall and mislead Congress. Ensure they can lie to federal investigators, leak confidential and classified FBI documents to the media, falsify federal warrant applications, and plead amnesia when called out by the media or congressional investigative committees. And if you complain, then you are unpatriotic and likely a “domestic terrorist.”

Work with the Left in crafting pseudo-opposition research to destroy a wrong-headed presidential campaign. Hire a foreign ex-spy as a source. Spread his phony dossier to the media. Name the entire hit operation, “Operation Crossfire,”and set entrapment ambushes to get opposition foot soldiers to lie. Leak to cable news the narratives of “Russian collusion.”

STEP THREE. Change voting and government rules when they are no longer useful. Claim any customs and traditions that are no longer advantageous are mere racist relics or the baleful legacy of old white men.

When in the majority, demand the end of the racist filibuster. When in the minority save it as a roadblock to fascism.

Damn the Electoral College as undemocratic and racist—unless the blue wall returns and the sure leftwing electoral votes of California, Illinois, and New York reassume dominance.

Let in two more states and with them four more progressive senators.
Pass a national voting law that supersedes state balloting and bans once and for all any requirement to show a valid ID to vote in person.

Insist that any effort to check mail-in ballots against registration lists, or to require full signatures and accurate addresses are racist and must be banned nationwide. The goal is to have 65 percent of the voters not vote on Election Day.

Expand court packing to the district and circuit courts to increase the number of enlightened jurists.

STEP FOUR. Remake the U.S. Congress. Insist that your Speaker of the House can bar any opposition member from a committee, despite the nomination of the minority leader.

When in the minority, insist that any such neutering of the House minority leader is racist and sexist. Arrest and indict any former opposition figure who refuses to obey a congressional committee summons; however, if the majority is lost and the right people are subpoenaed by the wrong people of the opposition party, claim such subpoena power is tyrannical, Nazi-like, racist, and bigoted.

Have your House speaker publicly tear up the State of the Union address, the moment the opposition president hands it over on national television. If in the minority, vote to censure any such Speaker who would destroy the hallowed protocols of the House and so cheaply attempt to embarrass an enlightened president.

The moment you take over a majority in the House, preferably in the opposition president’s first term, impeach him. Impeach him again a second time, when he rebounds. Impeach him when he leaves office.

Impeachment now, impeachment tomorrow, impeachment forever!
When in the majority, create and pack select committees. Call no hostile witnesses. Allow no cross-examinations. Pressure witnesses to flip testimonies to avoid possible criminal referrals. Send out dozens of subpoenas. Veto all minority party committee nominations—unless these members will not be reelected and have at least once voted to impeach the president of their own party.

Insist newcomers do not need to be tested or vaccinated for Covid. Demand that background checks or prior certification of refugee status are racist constructs—and no longer necessary.

Be selective. Turn away Venezuelans and Cubans, Eastern Europeans, or Taiwanese as counterrevolutionaries. Favor those from the poorest and most leftist homelands. Give all illegal aliens phones, money, IDs, and flights to whatever cities they wish. Claim that citizenship is a racist obstruction to voting rights, which are universal and have nothing to do with being a legal citizen.

* Submitted by special permission of Dr. Hanson from his private website :

If you do not take an interest
in the affairs of your government,
then you are doomed to live under
the rule of fools.
Plato