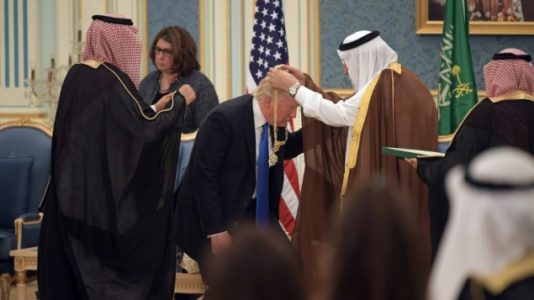 The king placed the Collar of Abdulaziz Al Saud around Trump’s neck at a ceremony at the Royal Court in Riyadh.

The host of the event declared that Trump was being honored for “his quest to enhance security and stability in the region and around the world.”

Trump was joined by first lady Melania Trump and several senior White House aides who were interspersed with Saudi officials throughout a grand ballroom.

More than a dozen horses flanked the presidential limousine Saturday as Trump was slowly driven to the Royal Court in Riyadh.

Trumpets played and soldiers stood at attention as the president walked in. As he arrived, Trump told the king the spectacle was “very impressive.”

Trump and Salman were later expected to have lunch together and hold a bilateral meeting.

Trump’s visit is aimed at forging stronger alliances to combat terrorism while seeking to push past the series of controversies threatening to engulf his young administration. 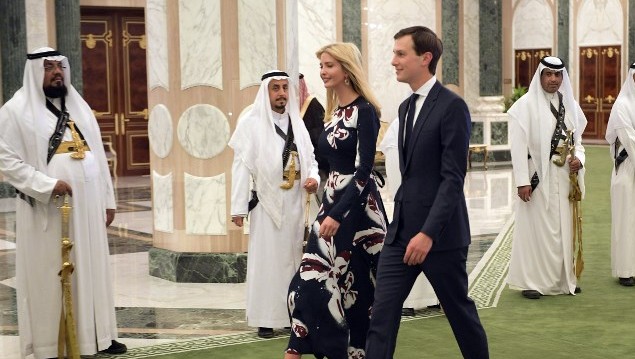 Ivanka Trump (C-L) and Jared Kushner (C-R) arrive to attend the presentation of the Order of Abdulaziz al-Saud medal at the Saudi Royal Court in Riyadh on May 20, 2017. (AFP PHOTO / MANDEL NGAN)

The president flew to Riyadh overnight on Air Force One and was welcomed during an elaborate ceremony at the airport, punctuated by a military flyover and a handshake from Salman. Trump is the only American president to make Saudi Arabia, or any majority Muslim country, his first stop overseas as president — a scheduling choice designed in part to show respect to the region after more than a year of harsh anti-Muslim campaign rhetoric.

The president’s stop in Saudi Arabia kicks off an ambitious international debut. After two days of meetings in Riyadh, Trump will travel to Israel, have an audience with Pope Francis at the Vatican, and meet with allies at a NATO summit in Brussels and the Group of 7 wealthy nations in Sicily.

As he arrived, the president waved from the doorway of Air Force One and then descended the steps, joined by first lady Melania Trump. The 81-year-old King Salman, who used a cane for support, was brought to the steps of the plane on a golf cart. The two leaders exchanged pleasantries and Trump said it was “a great honor” to be there.

A few hours later, Trump tweeted for the first time on international soil as president, writing “Great to be in Riyadh, Saudi Arabia. Looking forward to the afternoon and evening ahead.”

White House officials hope the trip gives Trump the opportunity to recalibrate after one of the most difficult stretches of his young presidency. The White House badly bungled the president’s stunning firing of FBI Director James Comey, who was overseeing the federal investigation into possible ties between Trump’s campaign and Russia. On Wednesday, the Justice Department relented to calls from Democrats to name a special counsel, tapping former FBI chief Robert Mueller to lead the probe.

Moments after Trump lifted off for Saudi Arabia, fresh reports stemming from the Russia investigation surfaced and threatened to overshadow the trip. The New York Times reported that Trump called Comey “a real nut job” while discussing the ongoing investigation with two Russian officials visiting the Oval Office earlier this month. He also told them that firing Comey had “taken off” the “great pressure” he was feeling from the investigation, the Times reported.

Meanwhile, The Washington Post reported that an unidentified senior Trump adviser was being considered a “person of interest” in the law enforcement investigation. In addition, Comey agreed to testify at an open hearing of the Senate intelligence committee in the near future, the panel said.

Despite his domestic troubles, Trump was expected to get a warm reception in Saudi Arabia. The kingdom’s ruling family grew deeply frustrated with former President Barack Obama’s detente with Iran and his restrained approach to the conflict in Syria. The king did not greet Obama at the airport during his final visit to the nation last year.

A giant billboard bearing portraits of US President Donald Trump and Saudi Arabia’s King Salman, is seen on a main road in Riyadh, on May 19, 2017. (AFP PHOTO / GIUSEPPE CACACE)

Saudi Arabia offered Trump an elaborate welcome ahead of his two-day stay. Billboards featuring images of Trump and the king dotted the highways of Riyadh, emblazoned with the motto “Together we prevail.” Trump’s luxury hotel was bathed in red, white and blue lights and, at times, an image of the president’s face.

Trump and the king met briefly in the airport terminal for a coffee ceremony before the president headed to his hotel before the day’s other meetings. White House Chief of Staff Reince Priebus told reporters on Air Force One that Trump spent the flight meeting with staff, working on his upcoming speech to the Muslim world and getting a little sleep.

Melania Trump wore a black pantsuit with a golden belt and did not cover her head for the arrival, consistent with custom for foreign dignitaries visiting Saudi Arabia. In 2015, her husband had, in a tweet, criticized former first lady Michelle Obama for not wearing a headscarf during a visit to the kingdom.

For a president who campaigned on an “America First” platform, the trip is a crucial moment for US allies to size up his commitment to decades-long partnerships while trying to move behind his previous controversial statements.

In a sweetener for Saudi Arabia, US officials said the Trump administration plans to announce $110 billion in advanced military equipment sales and training to the kingdom during the trip. The package includes tanks, combat ships, missile defense systems, radar and communications and cybersecurity technology.

After spending much of Saturday meeting with King Salman and other members of the royal family, Trump was to end the day at a banquet dinner at the Murabba Palace. On Sunday, he’ll hold meetings with more than 50 Arab and Muslim leaders converging on Riyadh for a regional summit focused largely on combating the Islamic State and other extremist groups. 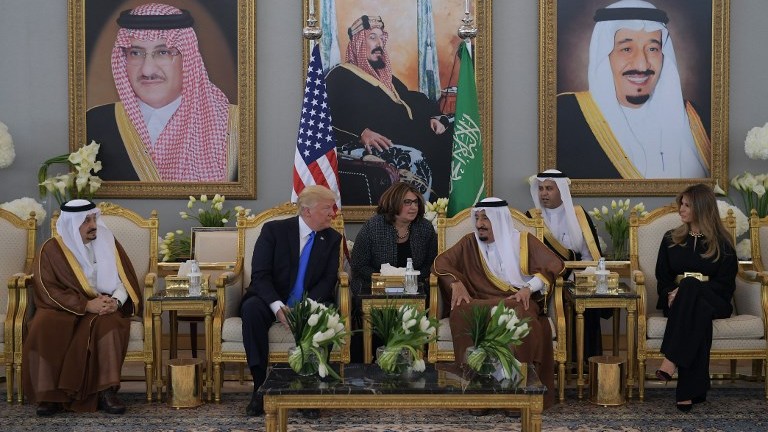 Trump dodged one potential land mine when Sudanese President Omar al-Bashir, who has been indicted on war crime and genocide charges, announced that he would not attend the summit for personal reasons.

The centerpiece of Trump’s visit to Saudi Arabia will be a speech Sunday at the Arab-Islamic-American summit. White House aides view the address as a counter to Obama’s 2009 speech to the Muslim world, which Trump criticized as too apologetic for US actions in the region.

Trump will call for unity in the fight against radicalism in the Muslim world, casting the challenge as a “battle between good and evil” and urging Arab leaders to “drive out the terrorists from your places of worship,” according to a draft of the speech obtained by The Associated Press. The draft notably refrains from mentioning democracy and human rights — topics Arab leaders often view as US moralizing — in favor of the more limited goals of peace and stability.

It also abandons some of the harsh anti-Muslim rhetoric that defined Trump’s presidential campaign and does not contain the words “radical Islamic terror,” a phrase Trump repeatedly criticized Hillary Clinton for not using during last year’s campaign.